A not uncommon inquiry that I receive from prospective clients deals with issues involving abusive or obnoxious neighbors, or what is generically referred to as a “bad neighbor” case.

The typical case involves a homeowner or renter who has problems with an adjacent next door or across the street neighbor, the latter of whom engages in a consistent pattern of harassment.  Common complaints include making false police reports, abusive/offensive language, undue noise, parking issues, unruly kids, dumping debris across property lines, and petty vandalism.

Many of these prospective clients want to seek a restraining order (RO), but this is a difficult remedy to obtain, much less to fashion.  To obtain a RO, the complainant must prove by clear and convincing evidence (a much higher burden than the usual “preponderance of the evidence” that is the norm in most civil actions) that unlawful harassment has occurred.

Unlawful harassment means much more than somebody taking offense at an obnoxious person — it requires evidence of stalking, physical violence, or a reasonable apprehension of physical violence.  You can’t get a RO just because you don’t like somebody. 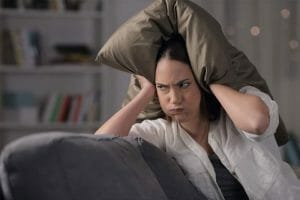 As imposition of a RO can have negative consequences against the person that is being restrained, so most judges will require proof of something that equates with actual criminal behavior.  Imposition of a RO can result in loss of firearm possession or a negative reference in a background check, not to mention the imposition of criminal penalties (fines and incarceration) if  subsequent violation of a RO is proven, so judges require a clear showing of unlawful harassment before they will impose so drastic a remedy.

The usual RO will require the offending party to stay a certain distance from the party seeking the relief, i.e., “come no closer than 300 yards and do not contact that person”.  However, in a “bad neighbor” context, where the offending party lives across the street or next door, such stay away orders are nearly impossible to impose given the proximity of the parties to each other.

The filing of false police reports is also difficult to remedy, as a civil action for damages based on such a theory may embroil the plaintiff at the wrong end of an anti-SLAPP motion under C.C.P. sec. 425.16 (this subject is beyond the scope of this blog, but information on it can be found in The Legal Gazette section of www.stridlaw.com) and which could find the plaintiff being ordered to pay for the defendant’s attorney’s fees and costs.

This is because the filing of a police report is a First Amendment exercise in petitioning the government for redress of grievances.  Suing in civil court for damages for activity that falls within the First Amendment is a major uphill battle.

Unfortunately, the law is of limited use in the context of a bad neighbor case.  The party suffering such problems may often be better served by retaining a realtor, as opposed to an attorney.

Bottom-line:  you don’t have to love your neighbor, but you should go to reasonable lengths to avoid a confrontation with same, even if you don’t want to.